What Really Went Down at the Feder Fiasco. 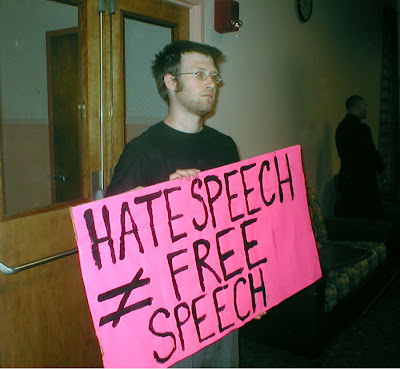 Yesterday I bemoaned the fact that I had no good video of last night's attempted speech by consultant and former Boston Herald writer Don Feder. It is one thing to read a written account of what happened (a more detailed written account than mine appears in today's UMass Collegian) but it is quite another to see and hear what happened for yourself.

Well, ask and you shall receive. Today a somewhat mysterious entity calling itself The Pioneer Truth Project has put the entire incident on YouTube, broken up into convenient snippets of various lengths. Here are what I think are the most compelling of the videos, with my own commentary on the action preceeding each video.

This video shows the just introduced Feder walking to the forum to a chorus of boos. Only one minute and ten seconds into his speech, students stand up and turn their chairs around, sitting back down with their backs to Feder. This is generally considered the worst symbolic insult a public speaker can receive. What exactly he said in a minute and ten seconds to warrant such an insult is not clear.

In a pleading tone, Feder asks for permission to speak but the taunts continue. Now angry, Feder slams the podium and calls what is happening "fascistic!" The audience responds with ridiculing laughter. The video ends with Feder making yet another attempt to begin his speech.

By the time this next excerpt begins things have deteriorated badly. Taunts from the audience, including personal ones concerning Feder's daughter, have caused him to fly into a rage. He throws down the microphone after shouting, "You've won! Hurray fo you, you goddamn Nazis!"

As you will see, the protesters cheer loudly as Feder attempts to leave the stage, but then is restrained by Republican Club members who beg him to reconsider. Returning to the podium Feder is still mad, saying he feels like he is at Boston University in 1969, which the audience takes as a complement. When Feder attempts to exit a second time, an older man in the audience begs Feder to return, and angrily denounces the police for "not doing your bloody job!" This seems to please Feder, who returns to the podium to make a third attempt to speak.

Video Five begins by showing an exasperated Feder futilely trying to use logic to convince the protesters to back off and let him talk. When that too is greeted with taunts and catcalls, Feder exits the podium once again, while campus Republicans again attempt to get Feder to reconsider cancelling his speech.

While the audience waits to see if Feder will return, debates break out between those who approve and disapprove of what is happening. One such debate erupts right near the cameraman and provides fascinating insight into the mentality of both camps.

Finally Feder, making his fourth attempt, was allowed to speak for three minutes and forty-five seconds. That proved to be the longest amount of time he was ever allowed to speak. What's interesting from this brief glimpse of the speech he came hoping to give is how academic and statistics-filled Feder's talk was. He hardly appears the bombastic hate spewer his critics were accusing him of being. In fact, the speech is actually a little dull. But after speaking for less than four minutes, an audience member begins screaming at Feder something about "fag is not only a word" and is subsequently ejected by the police even as he hurls insults at Feder all the way out the door.

This outburst is the last straw for Feder, who leaves the podium for the fourth and final time, despite a final plea shouted from the audience that Feder not submit to "a heckler's veto."

You can see all of the Feder Fiasco tapes by clicking here. Beyond that I don't know what to say. The tapes speak for themselves, and they don't tell a happy story about the future of the First Amendment. Here's a scary final thought.

The people in these videos are tomorrow's leaders.

This picture I stumbled upon online has no other significance than that I like it. 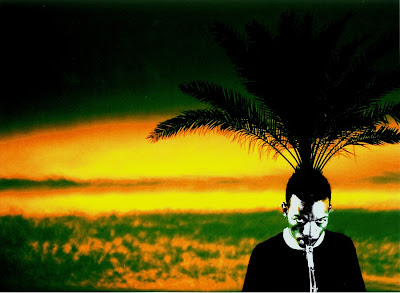 My Life and Times

Wow, yesterday I got this notification that the recording of my life story by National Public Radio's StoryCorps has been placed in the permanent collection of the Library of Congress. If you're ever in Washington D.C and want to listen to it just give the librarian the numbers on the right. (click to enlarge) 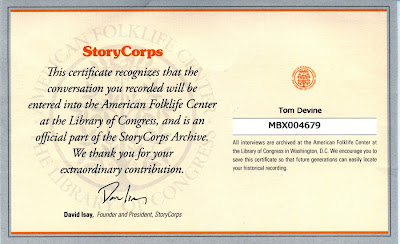 Gee, that's so weird that people a hundred or two hundred years from now will be able to listen to me (and Amherst's Hwei-Ling Greeney) tell our life's story. I guess that means I'm immortal, for whatever that's worth. Hey Library of Congress, the immortality is nice, but can't it come with a little money?

Today walking along the woodland way downtown I stumbled upon this empty can of Golden Anniversary Beer, to my knowledge the most vile tasting form of alcohol ever made. 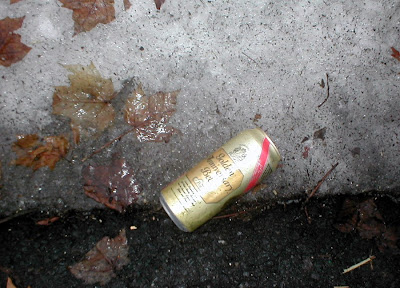 I think alcohol does so much more harm than good that I would not oppose a movement (which is coming sooner than you think) to make it illegal. On the other hand, the libertarian in me might win and I'll end up tolerating alcohol's legality, but not if Golden Anniversary still exists. My experience with it was similar to this testimonial on a beer website:

Many moons ago when I was a freshman in college one of the local frat houses that I frequented ran out of money at the end of the semester. So they were unable to afford the pallets of beast and natty ice that they usually consumed. Now since having no beer was inconceivable they were forced to pick an even cheaper brand. The cheapest they could find at the local distributor was Golden Anniversary Ice. So they bought several pallets of it.

Now since we were freshman and weren't paying for the beer they were giving us we pretty much had to take what we could get. So we were among the first to have to make the switch from Natty Ice to Golden Anniversary. At this point I truly believed that Natty Ice was the best beer ever I loved the taste. But Golden Anniversary was just too much for me. I had to just grit my teeth and take it while I was drinking the first few cans. The taste was absolutely horrid. It was like they had a basin under the floor grate in the Natty Ice plant and collected all the beer that fell through and canned it.

I can't acurately recall the exact taste except to say it was horrid. If you ever have a chance to try a can I advise you pass, unless you're curious about what a truly shitty beer tastes like.

Very true! And what the hell is it a "golden anniversary" of anyway? Auschwitz? The rise of Stalin? The invention of telemarketing? I never knew, but assumed it must be something awful. Now thanks to the Wikipedia, I have at last discovered that it honors the golden anniversary of the John Koch Brewery that makes it. 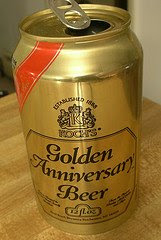 During prohibition the brewery continued operation by producing "near-beer" under the Kobru label, along with various flavors of soda, and seltzer water. The brewery also bottled Orange Crush soda during this period.

I like Orange Crush, but not enough to forgive Koch for inventing the worst of all beers. It does have one use to me however, whenever I'm tempted to drink beer, I need only remember the taste of Golden Anniversary to kill the urge at once.

Today I was at the Black Sheep Deli in downtown Amherst. 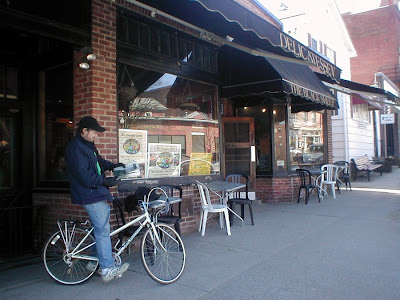 I saw these young women with psychedelic hair, and asked them what was with the wigs. 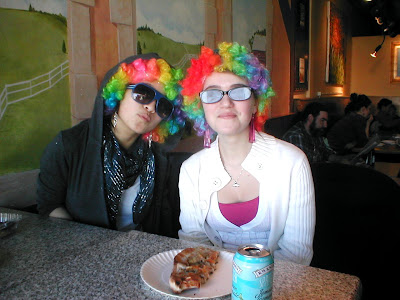 They told me they were dressing up weird to celebrate the arrival of Spring Break, which is next week. We regular residents of the upper Valley will also enjoy a brief break from the students before they return and the academic year moves toward its always roaring finale.

Northampton is the only town in our Valley where you see lavender houses. 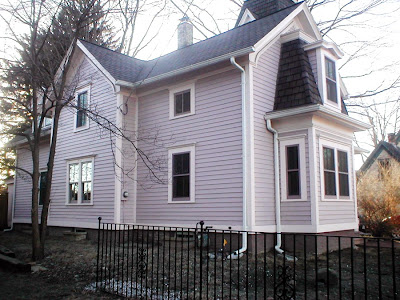 This song recommended to me by Tim is by a beloved Valley band and has references in it to Northampton such as the old Baystate Hotel on Strong Avenue.

My father in law is from England, and is a scotch drinker, although he likes a beer now and then. He's from Leicester and claims he loved Bass as a young guy, because its brewed in Burton on Trent, right near Leicester. Somehow, by the time I met his daughter in 77' he had made the switch to lame American lagers and would buy the cheapest swill at Town and Country to serve to his guests who drank beer. He was into Old Milwaukee and he called it "Old Mill," in his cockney accent. I'd tell him "this stuff is horrible," and he'd tell me thats because I serve it like the English, "warm." I tried to tell the guy, yeah, you can do that with an ale, but a bland American lager at that temperature, is vile at best. At the time, the Old Milwaukee slogan was "It doesn't get any better than this," to which I'd yell at the TV, OH YES IT DOES. Dad doesn't buy that crap anymore. His sons were giving him too much crap too. Anyway, I think the stuff is as bad as a Golden Anniversary, which my mother started to buy, until I stopped that too. One final note Tom, you're not serious about siding with progressive moonbats are you? I know the stuff kills, but so does red meat and large doses of water. What the hell man?

In the final analysis I doubt if I could lend much help to a goody two shoes campaign like banning alcohol. The people I would have to associate with would be unbearable. I do think a push is coming to ban alcohol though, and cigarettes too. All for our own good, of course.

The same old, If you can't make yourself look good, make the other one look bad. Same goes for, "If I don't like what your message is, I have to stop you.

You know that the woman she was talking about was a transsexual woman recently murdered, like so many are? That was in response to Don Feder saying that one is as likely to be a victim of a hate crime as one is of being struck by lightning.

I'm conflicted about the protestors tactics, but don't belittle all their pts. Don Feder truly *is* a hatemonger. "Single mothers, otherwise knwon as child abusers..."-Don Feder